INTENSITY BY ZYNAPTIQ BRINGS DESIRABLE DETAIL AND LOUDNESS TO YOUR AUDIO BASED ON SCIENCE!

GET INTENSITY ON PLUGIN BOUTIQUE We are an affiliate of Plugin Boutique and earn a commission from sales. Promoted Post The post INTENSITY BY ZYNAPTIQ… 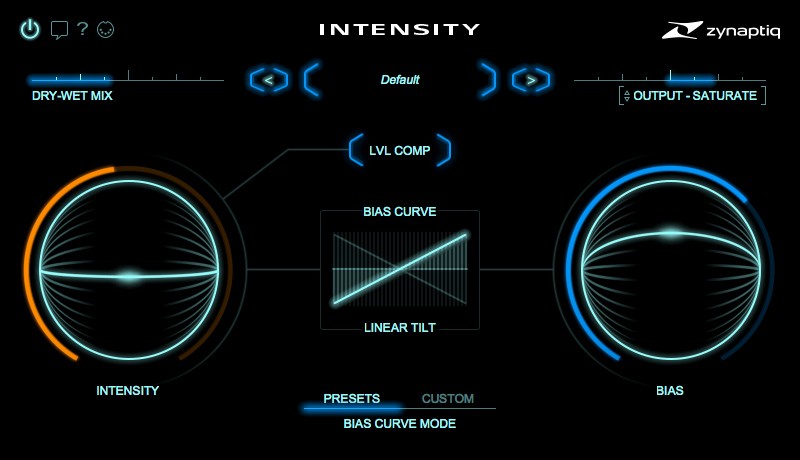 Zynaptiq is a plugin manufacturer with a line of forward thinking plugins that are often unique and the first of their kind. With this review we will be looking at their INTENSITY plugin.

INTENSITY is a tool that makes source material more clear. It brings out details, adds glue and cohesion, and if the user so wishes, can make audio very loud and aggressive.

It can be used in various scenarios. It works great on individual sounds and equals as a serious mastering tool as well. Using some of the extra features such as the BIAS control, the user can also use it for colorization of the sound according to taste. 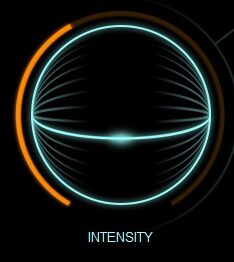 The heart of the plugin is the INTENSITY knob. Under the hood, INTENSITY analyses the incoming sound at audio rate, and then intelligently determines which details of the sound should be enhanced.

Pushing the INTENSITY button will bring out these details more, and as a result, the user gets a richer, clearer, more defined sound.

Think of it like this: you drive a very nice car, but it’s been raining, and you drove through the mud a little too much. The remedy is the car wash! As you engage it, you sit back and relax, and in no time, your car is all shiny again, ready for the road!

SO HOW DOES IT SOUND?

The below video made by the Zynaptiq team gives a very good idea of its capabilities.

You can hear exactly how INTENSITY sounds on an entire mix, instruments, sound effects and drum busses. It is impressive to say the least.

Of course we put it to the test ourselves. And INTENSITY truly delivers on its promise.

On entire mixes, it brings out details that were otherwise missed. Used on certain individual sounds, it’s easier to give them a place in the mix because the core of the sound is brought forward. INTENSITY can act as an EQ replacement. Or in other cases, EQ enhancement.

Since INTENSITY can easily bring out details, it works perfectly on a bus with a creative delay before it. Intensity will catch all the sparkles of the delay sound. This way, some impactful sound design can be achieved.

Or, automate input gain or other parts at the mastering stage to get the best/loudest levels possible and avoid unwanted distortions.

In the top left corner we see four icons. These are for Bypass, Tool Tips, Manual (very nice!) and Midi.

Speaks for itself but neatly laid out in the interface.

The best way to first get familiar with INTENSITY is to take a tour through its presets.  There are 23 presets to choose from plus default mode. Each preset comes with a clear description of its intended purpose. And of course, the user can also make its own.

When LVL COMP is engaged, the plugin will attempt to compensate for any loudness changes introduced by the INTENSITY knob; there is a precision version of this near the output gain slider, which will take the whole plugin into account (not just the INTENSITY knob). These functions serve to avoid the psychological bias that louder sounds sound better than less loud sounds.

BIAS is a really nice addition to the plugin. It gives the user detailed control over the affected signal. If you click on the current curve, a screen pops up with a wide array of other curves to choose from.

But maybe the best thing about this is that you are also able to draw your own curves using a few handy sliders. 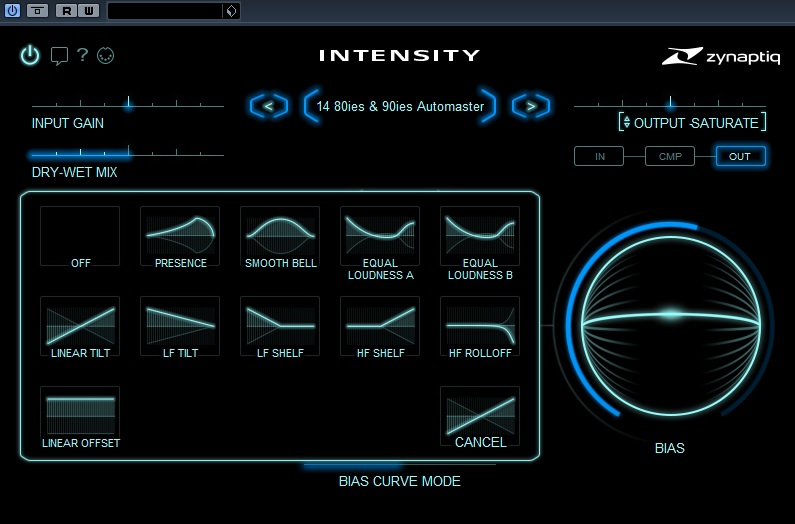 INTENSITY gives you a lot of options and can seriously alter the sound of your source material. So it’s important to keep in mind to use this plugin with caution. Often times, just limited amounts of INTENSITY already does the trick. There is no need to go overboard if the source material does not require for that. This is really the number one rule of thumb to get the best out of INTENSITY: Know what you’re doing, read the manual, experiment with all its options, and soon you will find that your tracks will benefit greatly from this plugin.

INTENSITY keeps a 5 star rating on Plugin Boutique and we highly recommend it.

The post INTENSITY BY ZYNAPTIQ BRINGS DESIRABLE DETAIL AND LOUDNESS TO YOUR AUDIO BASED ON SCIENCE! appeared first on Hammarica.